Platinum is not a trend. Which is to say that even though it’s incredibly popular, it’s been around since ancient Egypt. And it didn’t just rise to popularity recently; by the end of the 19th century, everyone was in love with platinum, and likely would have remained so had the government not declared platinum a strategic metal during World War II. Banned for jewelry use, this precious metal had to take a back seat for a while.

Now, it’s come roaring back as a favored jewelry metal that’s as lasting as it is beautiful. Harry Winston and Neil Lane love working with it, and celebs from Jodie Foster to Halle Berry have worn it on red carpets. Have a look at some of the platinum rings we have at National Pawn and Jewelry in Fort Lauderdale, and you’re sure to fall in love with it, too.

What is that everyone loves about platinum? It’s rarer than gold, twice the weight, and the strongest metal used in jewelry (which makes it scratch resistant). Plus, it’s up to 95 percent pure, so it’s less likely to irritate sensitive skin. 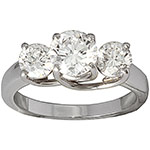 The everlasting and pure elements of platinum make it a perfect symbolic metal for wedding jewelry, with the added bonus that it’s great for everyday wear.  Beyond that, it’s natural white luster sets off diamonds beautifully because it doesn’t draw from their brilliance. But don’t think only the betrothed can wear this beautiful metal; it also looks stunning with pearls or colored stones in bracelets, necklaces, earrings—whatever you fancy. Browse platinum when you shop for jewelry at South Florida pawn shops and you’ll see what we mean!