It’s a silly word that’s fun to say, but also seems to denote, by its very sound, something delicate.  In fact, the word itself derives from the Latin “filium” and “granium” meaning thread and grain, and it was once called filigrane. It’s fine work in both senses, delicate metalwork that uses soldering to connect tiny beads and twisted threads into patterns that resemble lattice, or when it’s especially intricate, lace. Filigree has existed since around since 2500 BC, when it was mostly used to personal artifact adornment; the Greeks began adding gems to it in the late fourth century.

But even that didn’t transition filigree to jewelry use. That was the doing of King Edward VII, whose experimentation with jewelry in the Art Nouveau era gave rise to increased use of filigree in jewelry design. Any jewelry worth his salt know how to work with the fine pieces to create jewelry; today, it’s specialized work, and those who do it are known for it. Even then, it’s often machine handling that is the real skill, as little filigree work is done by painstaking hand. 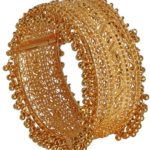 What’s interesting is that filigree isn’t just filigree; among designers and even from country to country, there is variation in design, intricacy, metals used, objects favored, and, of course, style. As you visit pawn shops throughout South Florida, you’ll see different examples and make your own comparisons. The one common element is the skill of twisting and curling the metal wires and soldering them into position, most often using small beads to hold the designs in place. Frames are usually made first, and the designs inserted. 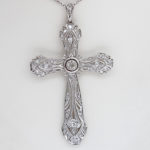 Stop in National Pawn and Jewelry in Fort Lauderdale, and we’re sure to have some filigree items to show you, as we often find them when we source at estate sales. As it can be used in everything from broaches to necklaces to rings to earrings and bracelets, examples abound.