Discover Diamonds When You Shop for Jewelry in the Ft. Lauderdale Area

Discover Diamonds When You Shop for Jewelry in the Ft. Lauderdale Area

You all know the four Cs of diamonds (right?). Of the four C’s; Color, carat, clarity, and cut (you’re welcome), only cut can be determined just by looking at a stone. And more often than not, what you’ll be seeing three-quarters of the time is the round, or diamond, cut—that’s because it’s the most popular—developed by  Marcel Tolkowsky in 1919. Though the original model has changed since Tolkowsky conceived it, it’s still what you’ll most often when you shop for diamond jewelry in South Florida. 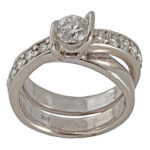 There’s a reason’s Tolkowsky’s cut took off, and it’s the same reason that the cut is also called “brilliant” in addition to its other names: the shape allows for the triangle- and kite-shaped facets, which generally number 58  just on the crown, create a cone shape that allows the maximum amount of light to pass through the stone and thus create the maximum amount of dazzle. And dazzle is what we want from diamond after all. If you’re wondering why all diamonds aren’t cut this way, then, it’s because some do prefer other shapes to round, also because a diamond’s original shape might better lend itself to one of the fancy cuts, like emerald or marquise. If you’re not sure what those are, ask us next time you stop in National Pawn and Jewelry in Fort Lauderdale.

Interesting to note that, per carat, brilliant cuts cost more than their fancy counterparts. That’s a function not only of demand, but also of the amount of diamond that must be sacrificed to create the round cut. The result is a price 25-35 percent higher than a fancy, which means if you want big over brilliance, go fancy.